Will the Brightest Places on Earth Shift to Renewable Energy?

When the sun sets and the lights go on, Earth’s man-made lights can be seen scattered throughout the globe and because of NASA’s astonishing photographs of our planet, we now know what places in the world illuminate the brightest. Here we highlight a few of the highest energy consuming locations and their position on renewable energy.

The City of Lights

If you’ve walked through the Las Vegas Strip in Nevada, you won’t find it hard to believe why “Sin City” has also acquired the nickname, “The City of Lights”. NASA’s Earth Observatory stated that “The Vegas Strip of casinos and hotels reputed to be the brightest spot on Earth”. The brightest spot on earth also contains one of the strongest light beams in the world, found shinning at the tip of the famous Pyramid known as The Luxor Hotel. The light beam consists of 39 individual lamps at 7,000 watts each that combined are about as bright as 40 billion candles! Various sources state the average hotel electricity bill is anywhere between $250,000 to $500,000 per month and with all of the entertainment, slot machines and hotel rooms, the Las Vegas casinos account for 20% of the power consumption of Las Vegas each year, and 7% of Nevada Energy’s electricity sales. Big casinos such as the Mandalay Bay and the MGM Grand are attempting to reduce their electricity bill by generating their own power and disconnecting from the Nevada Energy Power Grid.

With its vast array of solar panels, the Mandalay Bay hotel is helping put Las Vegas on the road to a cleaner energy future.

In fact, the Mandalay Bay installed 26,000 individual solar panels on the roof of its convention center, making it the largest rooftop solar array in Las Vegas, producing 8.3 MW or 25% of the power the casino consumes. Unfortunately, before disconnecting from Nevada’s Energy Power Grid, the Public Utilities Commission (PUC) is enforcing casinos to pay an expensive exit fee worth millions of dollars. 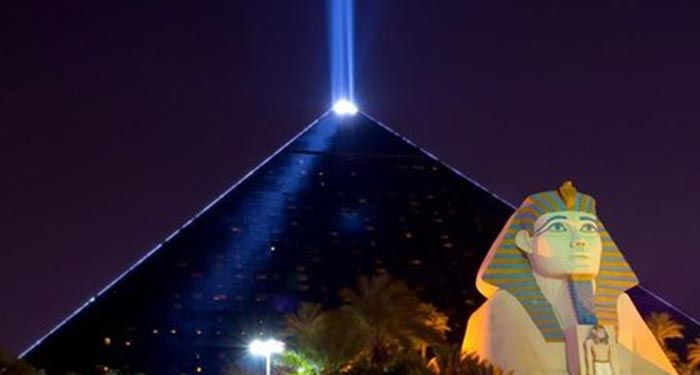 The Luxor Hotel. The light beam consists of 39 individual lamps at 7,000 watts each that combined are about as bright as 40 billion candles!

According to Theguardian.com, “If the resorts do decide to separate from NV Energy, it will still cost them a combined $126.5m, a price set by the PUC which they say is necessary to prevent broad consumer rate hikes and to compensate the utility provider for losses incurred on power plants and other assets purchased with casino demand in mind.”

Sources state that 70% of Las Vegas energy comes from natural gas, and despite Nevadan’s support for moving towards clean and renewable energy, current State regulations and PUC decisions are making it very expensive for the brightest place on earth to leave the power grid. Installing all of the necessary solar panels to power up the City of Lights would also be very costly, however; the hot sunny days are a great incentive for shifting to 100% renewable energy and for saving a lot of money in the long run.

The Loop in Chi-Town

The Loop is the famous downtown area in the city of Chicago, Illinois consisting of over 1000 high rise buildings, more than 100 skyscrapers, numerous restaurants, shops, museums, parks and a population of over 33,000 people that all together consume enough energy to gleam and stand out as another one of the brightest locations from outer space.  According to the city of Chicago’s Energy Benchmarking Reportfrom 2016,

“Across the city of Chicago, electricity, natural gas and consumption of other fuels within buildings is costing residents and businesses $3 billion per year, and energy used in buildings represents 71% of citywide carbon emissions.”

Since 2013, the city of Chicago has been obtaining energy consumption reports of over 2,650 buildings in every neighborhood. These reports have provided the city with a better understanding of how much electricity is being used efficiently, and how much is being wasted. Their analysis shows that “up to 25% of the energy may be wasted, and improving energy efficiency could save millions of dollars per year”. So far, an estimated $17.8 million have been saved from the energy bills of the 1,200+ properties that have benchmarked and reported for either two or three consecutive years. The city of Chicago has a vision of transitioning entirely to renewable energy in the near future. In fact, they announced that by 2025, their public buildings will run on 100% renewable electricity. The future is looking bright for the city of Chicago!

The Port of Long Beach

From outer space, the Port of Long Beach illuminates bright orange lights to lighten up the second busiest port in the United States. The Port of Long Beach handles more than 6.8 million 20-foot container units (TEUs) each year, cargo valued at $180 billion and provides 30,000 jobs. Unfortunately, the Port’s billing and energy consumption information is confidential, but we did come across a study done by UCLA that analyzed and estimated the electricity consumption of the Port of Los Angeles and the Port of Long Beach. According to UCLA’s Moving Towards Resiliency: An Assessment of the Costs and Benefits of Energy Security Investments for the San Pedro Bay Ports,

“The Port of Long Beach consumed an estimated 150,000 to 200,000 MWh during calendar year 2011 (CY 2011). To put this number in perspective, this might be approximately 6% of the electricity consumption of the City of Long Beach based on high level estimates from 2007.”

“The Energy Island Initiative is a comprehensive strategy for transitioning the Port to renewable power sources and self-generation systems. Along with creating the ability to “island” the Port to operate independently from the grid in times of emergency or other need, the initiative’s main objectives are stabilizing power costs for terminal operations, further reducing the Port’s carbon footprint, and increasing the competitive advantages of doing business at Long Beach.”

The link below provides detailed information on the five goals of the Energy Island Initiative: http://www.polb.com/news/displaynews.asp?NewsID=1464

Whether the intention behind shifting to renewable energy is about saving the planet or saving money, all three cities have taken the initiative to generate change. It may be a while before these places run on 100% renewable energy, but there is certainly hope for a cleaner and brighter future.

Hit enter to search or ESC to close